Past weekend was another concentrated dose of presentations and discussions about testing and software development, as I have attended test:fest, a free conference in Wrocław. 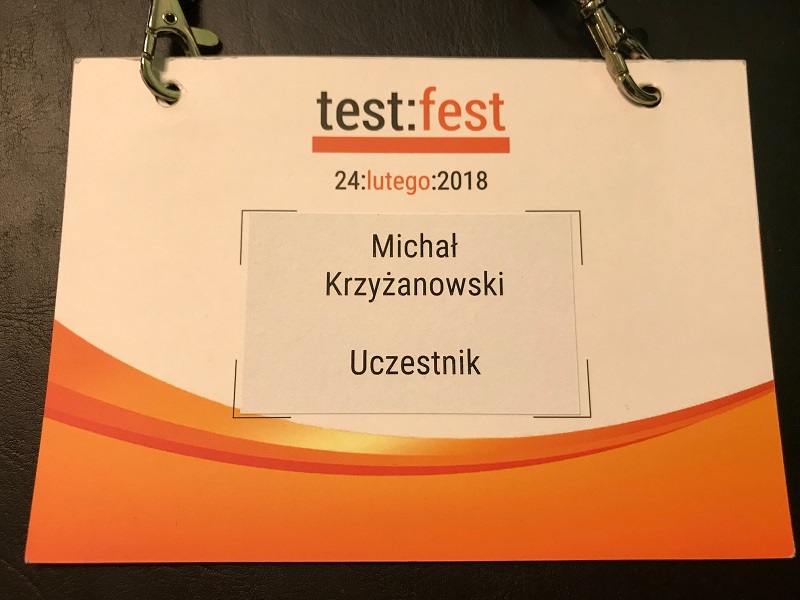 This year’s edition of the event killed two ticketing systems due to its popularity and forced the organizers to go with a lottery for the last pool of tickets. I wasn’t among the lucky crowd, so big thanks to Sebastian for giving me the chance to participate :).

The above also sheds light on a more prominent problem - growing demand every year and the fact that there are still very few testing events like this in Poland. Perhaps it’s time to launch test:fest edition in other towns… ;)?

The conference organizers and volunteers did an excellent job, by investing tons of their free time, we received a day of quality content, together with the possibility to meet many great people.

There were three types of tracks: presentations, discussion panels, and workshops. Now, let’s go through the ones I have attended!

The whole event kicked off with Łukasz Kmieć talking about giving feedback. It was somewhat a response to his previous prelections, where the only feedback he got was something among ‘cool’, ‘nice presentation’, ‘a company ad’ etc. He proposed the STAR model as one way to improve the quality of feedbacks and practiced it a bit with brave folks from the audience. I’ve written a bit about this a bit before, in my TestWarez ‘17 summary, other participants as well (e.g. Kamila). We all preach about the importance of feedback, but we suck at it in general. I discussed this with other test:fest participants and got few ideas how to improve this area - hopefully, you can see it in action later this year :).

So! If you have attended the event and still have not filled out the post-conference survey - go and do it!

Next, Erik Hörömpöli gave a presentation titled ‘Why you should share what you’ve got – telling tales of testing’. He talked about sharing what you have learned within your organization with fellow testers. In his case, individual engineers are working on different projects, in separate offices, which does not help with meeting face-to-face. They meet once in a while nevertheless, as it helps with empathy when you connect the face with the voice you hear only in your headphones during a call. Erik also mentioned how such get-togethers help to spread enthusiasm among your fellow testers - maybe your colleague passionately talking about this new tool or technique she discovered will trigger something within you and spark that motivational boost you needed?

This presentation and the discussion we had during afterparty, made me reflect a bit on the knowledge sharing process in my organization and how it changed (evolved?) after all these years I have been here. Definitely a topic worth a separate post :). Thanks a lot Erik!

Next on the agenda was something that I was eager to participate in, as the whole topic makes me often cry inside - the debate on which side of the Force you are between manual and automated tests led by Monika Lichota-Cywińska and Oleg Kulynyak. As I expected, it was a hot topic, and the room was full of people, which revealed a small organizational problem - moderators did not have microphones and it was hard to hear everything in the back. Also, for future reference, whenever you are in a room when someone is presenting something, do not hit that button on the coffee machine that stands in the same room ;). I liked the form of the discussion, where we considered both ‘manual’ and automated tests for a given use case. The whole debate was fierce as people were remarkably involved in the discussion and everyone wanted to throw in their 2 cents. In the end, everybody agreed somewhere in between, although I missed a more exhaustive summary of the whole debate. More time would help that a lot.

We used a huge part of the afterparty and the remainers of Monika’s voice to continue the discussion ;).

You can expect a post about this topic in the nearest future, as it pains me how people treat the two roles (or even create them in the first place).

Joanna Jeziorska was next with her presentation about psychological aspects of exploratory testing. I loved the analogies to Bear Grylls and the way she presented - she engaged the audience and made us interact with each other. She showed how involuntary and intentional thinking maps to exploration in testing. Perhaps for most of the seasoned exploratory testers, the talk did not include anything revolutionary but brought up essential basics of exploratory testing, which we often forget about. The presentation is definitely worth watching when it’s going to be available online.

This talk surfaced a great feat of test:fest - the fact that speakers have an opportunity to participate in workshops, really raises the bar in comparison to other events.

Mateusz Rumian and Adrian Gonciarz gave a technical talk about how they approached automating network generation. I would appreciate more context of the software-under-test, nevertheless it was interesting to hear something different from the usual stuff I do :).

The last but not least was Tomek Dubikowski, who won the award for the best presentation. For the 4th time - hats off! It was a real pleasure to listen to the brand new show about ‘Seven deadlier sins of quality’. When the talk is available online, do yourself a favor and watch it. It was great not only because Tomek is a fantastic speaker. The things he mentions are not some cool, fancy techniques or tools. They are the less techy aspects of software development that we often do not reflect upon because we do not have time for that in the busy world we work in. And they are universal, no matter what kind of development you are involved in.

Summing it up, I had a blast, met many fantastic people, discussed a lot about different aspects of quality and brought back many things to think about.

Thanks again, test:fest organizers, volunteers, sponsors and attendees. Hopefully see you again next year! Although it might be easier to submit a talk to get there… ;).

Check out other attendees’ perspectives: