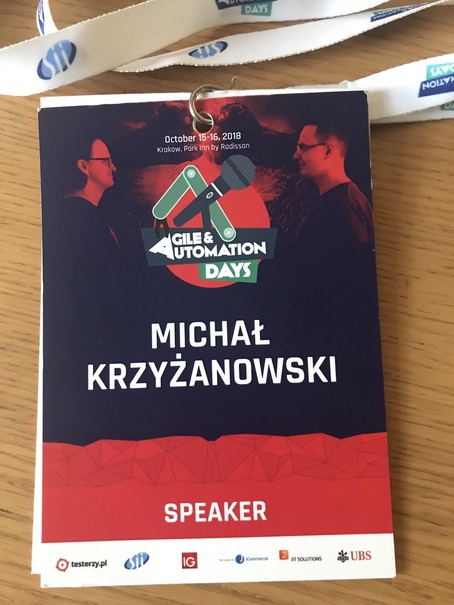 I’ve got back from Kraków, recovered from the cold I’ve caught in the meantime and now it’s time to sum up another conference that I’ve had the pleasure to attend to and speak at - Agile & Automation Days 2018!

This year’s edition of Agile & Automation Days took place in Park Inn by Radisson in Kraków. The venue was perfect for the number of attendees (organizers mentioned something around 300 people I think?): not overcrowded, with nice food and coffee availability ;).

On Sunday, speakers were invited to a dinner, held in Barka Restaurant - a lovely spot inside an actual boat :). It was a great occasion to meet the other folks presenting and doing workshops during the next two days.

The agenda for the conference was PACKED - many interesting topics at the same time forced you to make some hard choices. Conference attendees had a variety of choices between standard presentations, expert discussion panels and the open-space discussions. Congratulations to Michał and Bart for providing such an interesting programme :)!

They both opened the conference, reminding everyone about the conference main theme, ‘Face uncertainty, intensify learning’ and that the only constant thing around us nowadays is change:

Right after the opening, we’ve had a chance to listen to the first keynote of the conference given by Stephen Janaway, ‘Check this - test automation, a development managers view’:

Stephen reminded us about the principles that should guide us in test automation. One of the things that he shared was his view on the test execution time, in a proper British way - it should not take you longer than to make a tea :).

I encourage you to go through his slides: link.

After the keynote, I’ve had my first dilemma about picking a talk, since I’ve wanted to hear Mateusz and Olga’s talk… but I’ve finally gone with ‘Feature branching considered evil’ by Thierry de Pauw.

Trunk-based development is something I’ve heard some time ago and I’m very eager to try it out in the future (though not many people share my enthusiasm :D). Such approach requires many things already in place to make it successful, and that scares folks and makes them think feature branches are a perfect alternative. Not so long ago, I’ve also considered them a great way to mitigate many risks, but they usually end up being a cover up for developing software in a crappy way.

Check out Thierry’s presentation at his site: link.

After the coffee break, I’ve decided to join the first expert discussion panel about leadership (and now I’ll have to wait for the recording of Noemi’s ‘Using AI to conquer uncertainty in games’ 🙁). Experts (Karen, Stephen, Michał and Michał) answered questions revolving around two topics introduced briefly by lightning talks given by both Michałs :).

#leadership experts panel at @AADaysPoland! I wish some managers & leaders I know would sit here too... :) pic.twitter.com/Iug86oLqMm

As I’ve mentioned in the tweet, I wish some people I know would have a chance to listen to this - it’s one of the fundamental problems in our industry, that managers/leaders coming from the engineering background do not work on their managerial skills. My takeaways are creating a ‘to-talk-with list’ instead of a ‘to-do list’, and yet another book added to the ‘to-read list’: ‘Multipliers’.

I’ve skipped the last part of the panel to attend Dmitry’s ‘Scaling testing at Facebook’. It was a bit intense, but it was fascinating to hear about the problems they face at their scale and how they solve them, using e.g. pre-commit hooks kung-fu. It was the second time we could’ve heard about trunk-based development again at the same event too :)! Unfortunately, for most of us the ideas they’ve implemented remain only an inspiration - I wonder when such scale becomes something common…?

After lunch, I’ve decided to listen to Tomek Kropiewnicki and his ‘It’s not done, until it’s gone’. The most important takeaway for me was his proposal of DevOps kanban board:

DevOps kanban board - you’re done, when you decommission your features! #aadays2018 #devops pic.twitter.com/zyUlReAzbD

I’ve seen so many times business stakeholders and engineers forgetting about features because they have finally reached that magical ‘Done’ state. And when the time has come to maintain that feature, refactor it, support it and rework it suddenly everyone was wondering why we do not deliver the ‘current’ work in the iteration on time. It might be just semantics for some of you, but I’ve already seen examples of how changing the name of a state in the flow affects people’s perception.

Next, it was time for the second keynote: Karen’s talk about ‘Making the test automation visible: why, when, what and how’.

2nd keynote at @AADaysPoland - ‘Making test automation visible - why, when, what and how’ by @karennjohnson! pic.twitter.com/9LaiL60Lu1

She discussed many important aspects that we tend to forget, especially in organizations where we’ve finally landed in a comfortable place and don’t have to fight for our spot anymore. I liked her common sense and simplicity about visibility - it’s not about measuring things with some silly metrics but merely talking with proper stakeholders, in a way you won’t bore them to death.

Slides from her talk: link

After a prolonged coffee break, I went to listen to Vera’s and Beren’s talk on including learning in the backlog:

I’ve loved their dynamics and the way they have presented the talk! I’ve heard about their approach during the dinner on the previous evening, and I was fascinated by their case study and having stories dedicated to learning as a regular first-class citizen in the backlog, with acceptance criteria and a definition of done. It resonated with John Cutler’s article I’ve read recently - we very often overlook learning in our day-to-day work and expect it to happen magically on its own.

He spoke about driving the quality of the application based on the feedback loop from your clients and QA not being a gatekeeper but an enabler/advocate.

The second day for me wasn’t that much about presentations: not only I had my talk but also the second experts discussion panel about automation. I’ve managed to listen to all the presentations after mine, which were:

It was a great showcase of how production can help you assure quality after going live, full of examples - or how Anks summed it up :):

Apart from having a presentation, I was also invited to join the second expert discussion panel about test automation (details: link). Milena, Remik, Alexei and I answered questions revolving around two topics selected by attendees before the conference: test automation in distributed systems and test flakiness. Some of our discussions had to be cut by Bart to make room for more questions, and sometimes we were drifting a bit away from the question itself. However, from what I’ve gathered after the panel people enjoyed it :).

Karen posted a small mindmap summing up the panel:

My talk was titled ‘Evolving as a QA. Do you still care about quality?’. I’ve decided to go with a less technical talk this time, even though AA Days is considered a place with ‘meaty’ topics. I think we talk enough about technical matters, while the general aspects are as much as needed. The feedback was heartwarming, and I am thrilled people enjoyed it :).

You can check out the slides here: link.

It would probably be nice to write an article that sums it up… :).

All-in-all I enjoyed the conference very much - presentations were diverse, showing many aspects of testing, automation, and general software development. Were they technical/advanced/enter-whatever-you-expect enough? To be honest, I don’t care about that anymore :). Even if there’s a basic talk and it sparkles an idea in your head or forces you to think about given topic - it was worth it. Listening to someone doing things the same way you do is also not a waste of time: someone just assured you that you’re on the right path - embrace it.

I loved that there were many speakers from outside Poland - it was a chance to meet many people I knew only from Twitter, their blogs or other places on the Internet, and it also brought a fresh perspective to all the discussions. As usual, it was also an excellent occasion to reunite with some folks from Poland, that I haven’t seen for a while. The conference attendees are even more important than talks - due to this, I’ve participated in many inspiring discussions on various subjects, including tech recruitment (thanks Mirjana & Anand!), testing & software development (thanks Viktor and Remik!) or even conferencing itself (maaaany people :D). Some of those were really juicy in terms of content and ideas - I wish we’ve recorded them :).

Thanks to Bart & Michał for a great agenda and all the organizers, volunteers, sponsors, and other attendees - AA Days 2018 was fun!